The fishing here in the Gulf of Chiriqui continues to produce good numbers of fish both inshore and offshore so far.

The unlimited Dorado fishing is gone, but there still are some very nice, big “Green Jumpin’ Beans” still out there for the taking. For the most part the Dorado we have had this year are pretty darn big, as far as Dorado go. Usually there are some “peanuts” in the mix, but this year the Dorado are averaging about 25 pounds, with lots of 40 plus pounders hammering the baits. For the first time in years, we actually started to consider the Dorado a nuisance while fishing for Marlin and Sailfish…them little buggers keep grabbing our Marlin baits!

Last year a buddy asked me if I was interested in assisting with a tagging program for Dorado…I said I would help but was worried the tags might not taste good. We have plenty of fish in the box by noon, and after that we have just been releasing all the healthy fish we catch. Maybe this tagging thing will work here in the Gulf of Chiriqui, after all. Well that was what was going on in January…then the commercial long liners returned…not a lot of them, but some…and the Dorado fishing pretty much shut down!

One of those long line boats actually caught soooooo many Dorado that when they hit a few waves…the boat went down…it was just tooooo heavy! All hands were recovered alive, but 25 THOUSAND pounds of Dorado was sent to the bottom. At oh say 20 pounds a fish…that is 1250 Dorado. How long does it take a good sportfisherman to catch 1250 Dorado??? Does anybody see a pattern here????? So the tagging program will have to wait…for now we have to worry more about cutting turtles and other bycatch out of the commercial long line gear.

The Marlin and Sailfish are doing their thing…managing to rip some line off the reels from time to time. Both live baits (Bonita) and plastics are producing a couple of good shots a day at Marlin every day. Lucky for us those darn Dorado are no longer bothering us… There is more good news on the Tuna front…they’re here!!! The big schools of big fish have not yet arrived, but some of the early patrols of Yellowfin are starting to show up…some of them darn right HUGE!!!!! A few over 300 pounds! Over all the offshore fishing is very good. As the US gets pounded by winter storms we are basquing in 85 degrees of hot, dry weather…day after day.

The only down side to this for us is the fact that when the storms are that bad up north…we catch the tail end of the storms down here in the Banana Republic. Of course there is no minus 40 temperatures, but the winds can get howling down off of the Continental Divide. Nortera or El Norte as it is called can produce 50 plus mph winds in gusts that can run quite a ways offshore…against the sea waves. The other day after a great day of fish and sun fun we started to hear reports of Nortera…OHHHH NOOO! Everything was great…30kts…smooth seas…and then a 14 miles offshore we saw it. White caps as far as you can see. The waves picked up to 8 foot…maybe more. Oh and they were very close together. For some reason I started feeling like I was driving a submarine at times. I have a friend up in the Florida Keys who is a bit older than me.

This guy will fish 8 days a week if possible…he is one of my heros! When I get in over my head sometimes I think of Jim and say to myself WWJD…What Would Jim Do. (No ill will meant to Christains.) So here is this crazy old man (me) yelling something like “Fish Like a 30 Year Old” as I grab a handful of throttles and jam them forward and charge into yet another set of nasty ass waves. Let’s hope the clients won’t need toooo much mental counseling when they return home. They did suggest some counseling for me however! Inshore the fishing is good with one little problem. About 9 out of 10 Roosters we catch are caught on live bait…mostly Blue Runners, or Coninuas. The Blue Runners are all over the place…but they just will not eat anything we have. We spent 4 hours the other day chasing school after school of these little rasquals and could only catch 10 or so.

So this is slowing the Rooster and Snapper fishing way down inshore. Capt. Chui can still produce Roosters on most every trip…but it is just plain tough. We have had a few experienced anglers bring their own equipment on the inshore trips. Only problem is what may work up north may not work down here. We lost a HUGE Cubera the other day…we use Shimano 20000 Saragosa Reels with 130 pound leaders. These guys had some nice pretty little reels with 50 or 60 pound leaders.

The rest of the story was kinda sad, if you know what I mean!

REEL INN IN PANAMA’S FISHING REPORT April – November, 2020 Well it’s sorta hard to tell how fishing is since we are not really allowed to 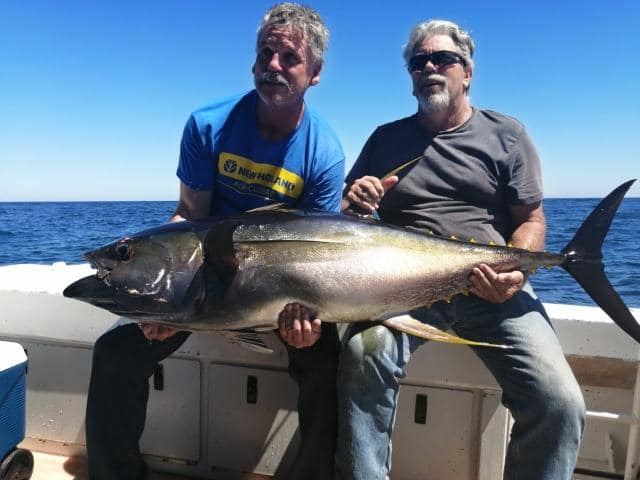 The Tuna are here and expected to stay for awhile!

REEL INN IN PANAMA’S Fishing Report October/November 2019 Well, we are in the middle of the “Rainy Season” down here in the Banana Republic, but

Back to Top
Translate »