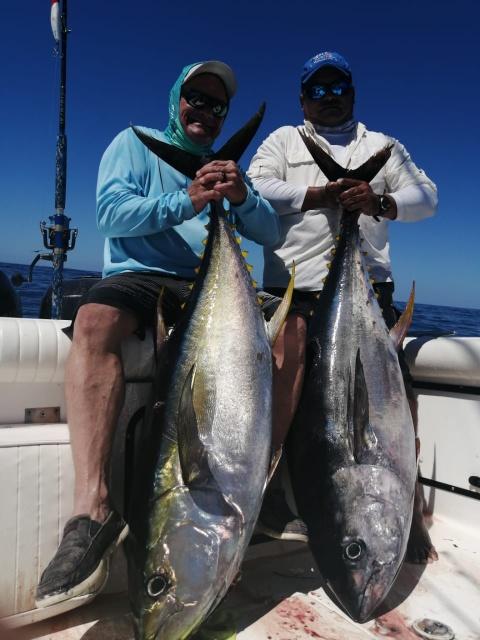 So far sooo good, I think. As usual there are not many dare devils that venture to our part of Panama to fish in the Gulf of Chiriqui in the heart of our rainy season. Those that do however, are handsomely rewarded…for the most part. The large schools of behemoth Yellowfin Tuna have headed to other locations, but a few of the smaller brothers can still be found from Isla Secas, to Hanibal Bank and Isla Montuosa. Most of these little brothers are in the 30 to 40 pound range, but there have been some reports of some weighing in the triple digits…keep in mind “some” fishermen tend to exaggerate just a bit.

Dorado…Dorado…Dorado…Lots of Dorado! The government of Panama has taken an important step in shutting down the long line fishery for Dorado for two months. This has done two important things for our fishery…one there is a Dorado or two under most every log, palm frond, and piece of floating debris in the sea…and two, without the long lines spread out for miles, our egress to the fishing grounds is unimpaired. I personally have never hit one of these submerged lines (yeh right!), but I hear tangling with one of these long lines can really slow your day down. Costly for the long liners also.

Speaking of Tangling with things…a few folks have gotten the opportunity to “tangle” with a Marlin or two lately…both Black and Blue. All the fish we target eat the same food…Marlin might eat more of it, but still they all eat the same stuff. If you are trolling for Dorado…make sure you are ready for a “Girl in a Blue (or Black) Suite” to join the party. Isla Montuosa and “the Bank” seem to be the places to be heading to…Isla Ladrones seems pretty slow lately.

In the “also ran” category there have been a few Wahoo catches, but not many Sailfish at all…yet!!! Bottom fishing for Snapper and Grouper has been doing very well also. The normal spots are producing…well normally. If you have some good numbers that nobody else does…bottom fishing does get a lot better! Never underestimate the power of a local fisherman!!

Inshore fishing is also producing pretty well…the fish never leave, or really move around that much either. The Inshore fishery is more controlled by the tides, the moons, and all kinds of “hocus pocus” magic shit! Again I can not over emphasize the need for a good local guide to consistently find trophy fish! I’ve been fishing here for over 10 years and about the time I think I have the inshore fishing figured out, these local guys prove me wrong! Of course the Roosterfish is at the top of most people’s “bucket list”, and with our catch and release philosophy here in Panama, our Rooster fishing is off the charts. I had a fishing guide from Montana, USA fish with us a month or so ago. He had been to FOUR countries hunting Roosters with no luck! Keep in mind Roosters are only available in Central America…Panama was his last chance. I don’t really remember if he caught 2 or 4…But Yahooooooo for him!!!

Oh and for a good ole “let’s go bend some rods” fishing…the snapper at the river mouths is always just tons of fun…again a good guide, and knowing the tides helps score!

Well that about does it for the Rainy Season Fishing Report. I really do not get it…our fishing is really pretty Good to Flippin’ Hot in the rainy season, but still hardly anybody fishes!! Is it going to rain…well yeh probably…maybe, but is it ONLY water. Are you going to catch fish…well yeh probably…maybe but THEY are IN the water!!! Bend some rods in the Gulf of Chiriqui. Come join us in Boca Chica, Republic of Panama…Gateway to the Golfo de Chiriqui!!!! FISH ON!!!! 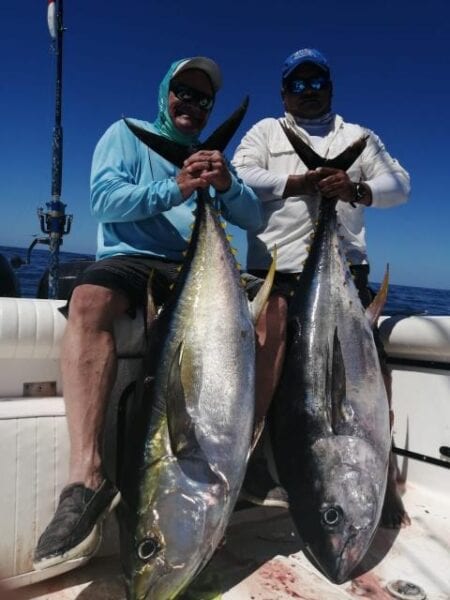 Well, we are in the middle of the “Rainy Season” down here in the Banana Republic, but to be honest it seems like a little

Well, we are in the middle of the “Rainy Season” down here in the Banana Republic, but to be honest it seems like a little

Yellowfin Tuna a-plenty with us here at Reel Inn in Panama!!! A full Team Effort helped land this beauty for Greg Fisher from Florida! The

Offshore Dorado Catch on Hannibal Bank.& Isla Montuosa with us at @reelinninpanama in Boca Chica, Pa…

Back to Top
Translate »